The device in use within the Lodge and Chapter crests and its main feature is perhaps a Lodge founder member's memory of whom witnessed such an event. It could be that, on return from active duty, he was someone who was then key in setting up the Comrades Lodge. Indeed, some of the founders were part of the Royal Army Medical Corps which narrows down who could have been the designer but the this part of history is not recorded. Still, the artist or member commissioning it would undoubtedly have seen or understood the human side as well as the destructive side of war. This same principal device showing three soldiers is reflected throughout all versions of the crest whether Craft or Chapter and whether ancient or modern.

The above images show the latest version which is has been constructed by W.Bro. Paul Masters PM, from the outer part of the old crest and the inner relief is a copy of an enamel pin commissioned for the Centenary Jewel.

The battlefield is most likely to be one from Second Anglo-Boer War, fought between 1899 -1902. Although we can only speculate about its true location, it is more than likely a representation of a vast panorama in South Africa. The precise location is, however, somewhat irrelevant to what it actually represents. Military people all over the world would understand the importance of battlefield cameraderie. The fallen rely on their Comrades to relieve their sufferings and show compassion to their immediate needs, which is reflected in the present day ethics of Freemasonry.

There are two distinct designs of the original crest which have been used from consecration to the time of the millenium. The first, which appears to be an etched design was a basic image of the complex scene. This had been used on printed matter such as summons, and letter heads. It was in use for over 100 years, but as computerisation took hold from the 80s, the crest was reproduced on the summons electronically and its quality deteriorated. The second design (pictured here) is most definitely the original (a wafer thin piece of tracing paper with the design exists in the lodge records) and is the model for the earliest Past Master's Jewel, an example of which is within the Library and Museum at Great Queen Street and is within Roddy's Set displayed at Colchester. It shows a river and bridge, which may localise the scene further to a particular spot in South Africa. 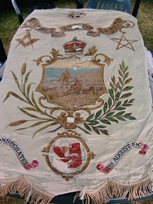 The old banner (left) is now completely destroyed with only a few fragments of this painted silk original left. Over the course of 100 years passing from Secretary to Secretary it has rotted away, with only the smallest fragments left. It is unfortunate that it could not be protected and preserved, but images of this original do exist.

The replacement was redesigned by commission and with under the guidance of W.Bro. John Ramsey, PM, and produced by the talented embroidery department at the United Grand Lodge of England (with acknowledgement to Anna Fernandez), to coincide with the Lodge Centenary with a rededication ceremony formally bringing it into service at that meeting.

It is, for all intents, a faithful replica, but there is at least one difference between the old and new. The most prominent of any amendments is that the ear (s) of corn & sprigs of acacia are now replaced by a wreath of laurel. Like the Lodge crest, the main feature on the design shows three soldiers on a battlefield. One is tending to a wounded comrade whilst another stands guard. A regal crown caps the main feature denoting the Royal Warrant and Approval of the Consecration. Gold Masonic symbols are depicted at the top of the banner, depicting the All Seeing Eye, Square & Compasses & a Pentangle. At the bottom of the design two gilt labels either side of a Colcestrian heraldic coat of arms show the Lodge consecration date of 6th August 1903.

The main device is explained as part of the crest notes. The Colchester coat of arms first appeared on the Royal Charter granted by Henry V in 1413. The red represents the blood of Christ; the green cross, the living cross of Saint Helena; the three crowns, the three Kings from the Nativity Story; and the nails holding the three crowns, the nails which held Christ to the cross. However, the original and present lodge Banner shows white Cross with no nails; a design used as a result of the Reformation. The original Colchester crest of St. Helena's green cross design was reinstated in Colchester in 1915 which is notably after the consecration of the Lodge.

The new banner was rededicated on the 15th September 2003 and will serve the members of Comrades Lodge for many years to come. It no longer resides in damp and cold conditions and hangs proudly on the walls of the Masonic Temple at Colchester.

Comrades Chapter does not have a banner in its inventory - the necessity for such an article is in these modern times has somewhat diminished.